Denis Jordan was professor of inorganic and physical chemistry at the University of Adelaide 1954-1979. His studies on the effects of denaturing conditions on the properties of nucleic acids set the scene for the discovery by others of complementary 'sticky ends', knowledge which was crucial to the methods of gene technology. He also studied the relationship between the chemical and stereochemical structure of polymers and their solution properties. 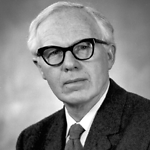