Thomas M. Cherry was a mathematician held in high regard for his research in the mathematics of ait-flow in trans-sonic flight and global differential equation theory. He was influential in the teaching of mathematics in Victoria, both at the University of Melbourne where he was Professor for over 30 years, and in revising the secondary school syllabus. For the University he Supervised the installation and operations of the CSIRAC computer from 1956. He was also Chairman of he Academic Planning Board of La Trobe University. Cherry took a leading role in several mathematics societies, serving terms as President of the Australian Mathematical Society and the Mathematics Association of Victoria. He was a founding member of the Australian Academy of Science and also served a term as President.

The University of Melbourne Archives 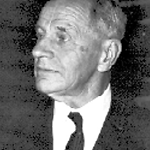