Sir Jack Becker was a businessman and pastoralist, who gave generously to the Australian Academy of Science's building program. The Academy building has been named Becker House in his honour. 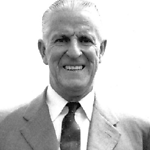