Walter Stibbs spent his early career in Australia, working at the Mount Stromlo Observatory from 1940-1942 and 19451951 and lecturing in the Department of Mathematics and Physics at New England University College, Armidale (now University of New England) from 1942-1945. After 30 years at the University of St Andrews, Scotland, as Napier Professor of Astronomy and Director of the University Observatory, he returned to Mount Stromlo in 1990 as a Visiting Fellow. During his first period at Mount Stromlo he participated in early optical munitions work, designing folded optics for a gun sight and a sun compass for use by tanks in desert warfare. 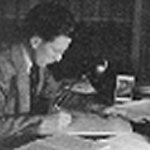