Keith Bullen was Professor of Applied Mathematics, University of Sydney 1946-1971 but had earlier worked at Auckland University College 1928-1940 and the University of Melbourne 1940-1945. He studied at Cambridge under H. Jeffreys working on theoretical seismology. Much of his later work was directed towards confirming the theory of the Earth having a solid core. His suggestion that nuclear explosions be monitored so the resulting earthquake waves could be studied was ultimately accepted. Bullen was active in international seismology, serving on policy bodies and in executive positions in organisations such of the International Association of Seismology, of which he was President from 1954 to 1957. Among his publications were An introduction to the theory of seismology (1947, 3rd edition 1963), which became the standard text and was translated into other languages, and The Earth's density (1975). 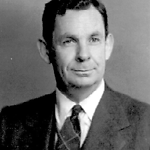